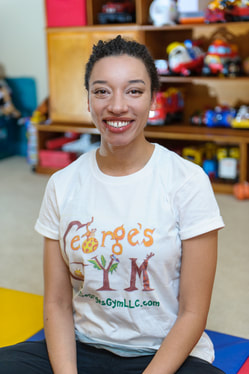 Rachel is a Black/biracial woman small business owner, who was raised in the western suburbs with 5 siblings (4 of which were adopted) and homeschooled until college, with the exception of preschool and 6th grade (a long story for another time).

At the age of 6, she began taking gymnastics classes through a mobile program that was offered by the Kane County Homeschool Group. Her Coach, Gary, was the first person to unleash her love of flipping sideways, upside-down, backwards, frontwards and any way she could! Gymnastics quickly became her favorite sport and her eventual mobile business was very much inspired by by the gym that "came to her" as a child.

She continued with Coach Gary for years and other various gymnastics facilities until age 14, when she grew a little too tall to keep advancing. At that point she switched to teaching at the recreational level as an assistant instructor at Excel Gymnastics in Batavia, IL. At 14, Rachel also began taking college courses at Wabansia Community College, for the sake of getting a few prerequisites out of the way before applying to University in the coming years.

During that time she also discovered a deep love of Track & Field and became a hurdler and sprinter for Batavia High School. Then, thanks to her gymnastics background, she also became one of the first female pole vaulters at the high school level in Kane County!

With all of the course work Rachel completed throughout high school, she was able to graduate early at 16, applied and was accepted to Concordia University in River Forest with a full ride, where she majored in Psychology and minored in Art. She continued in Track & Field and in her freshman year became one of the first female pole vaulters for her university as well as taking first place in conference 2 years in a row. But in addition to running, jumping and vaulting for the Track Team, she decided to give Cheerleading a try too and had a blast!

During college Rachel also continued to teach gymnastics at Excel and graduated to a lead instructor for toddlers through advanced intermediates. As well as led birthday parties on the weekends! At Concordia she even taught swimming lessons to 2-3 year olds and seniors!

Following college, Rachel very much wanted to combine her years of experience teaching gymnastics with her education and love of athletics. So she became a full-time instructor at The Little Gym of Chicago, and within a year, was promoted to Program Director at The Little Gym of Glenview.  It was through this experience that she met "George," a fellow instructor at TLG who convinced her that she was ready to open her own company, dedicated to spreading the joy of Tumbling and Fitness with children. Thus "George's Gym" was born in 2008, as one of the first completely mobile companies of it's kind at that time...in the middle of a recession...and the rest is history!

Although Rachel and George parted ways a couple years into the business, Rachel continued to grow the dream from a few private classes for families in the North Shore to now spanning the entire Chicagoland area. The dream has also evolved into programs that reach both the most affluent private schools in Chicago and Daycare facilities on the South and West sides. By using the "Robin Hood" way of thinking Rachel has created programs that allow communities to support each other and make George's Gym classes accessible to every child, no matter where they live!

"Through George's Gym I have found my true calling in life. I love creating programs that challenge a child's mind and body, but are also so much fun that the child doesn't even realize how much they are learning! Thank you to everyone who has helped make this dream a reality."  ~Coach Rachel
To learn more about the George's Gym journey, please check out the About Us page for more insights. To find out the latest news and updates, please visit our Home Page or read our Reopening Announcement.